Reflections Within the Transitioning Grid

An exhibition by Merrill Shatzman and libi rose

How we navigate, plan, design and build, and where we live, work and shop, are all dependent on different grid formations. The grid provides us with a sense of security, balance, orientation, boundary, exploration and containment. Psychologically, the concept of a grid is a constant throughout our lives, appearing as constructs in our memories, in our behavior, and in our daily life functions.

Decisions of all types are made in relationship to the grid, yet what emphasis is put on the unpredictable organic forms that visually evolve inside these spaces, counterbalancing our geometric borders?

This exhibit visually and formally examines the relationship between organic form and structure through deciphering images of contemporary curtain-wall architecture found in New York, London, Shanghai and Tokyo. It presents the artists’ vision of subjects in multiple ways and formats while fusing traditionally-made imagery with technologically-generated applications. The work was digitally produced, but it is at its root, very much organically constructed.

The prints and installations were generated from photographs capturing abstractions within contained spaces, by focusing on form, layering, contradiction, and beauty. In addition to revealing free-flowing lines, organic shapes and unique patterns made from reflections and shadows, the artists’ interests in cartography, urban planning, architecture, typography, calligraphy, archaeology, topography, and symbolism become evident.

Thank you to our sponsors
Reflections Within the Transitioning Grid: Merging Structure, Form and Design with Technology has been supported by Duke University Council for the Arts Collaboration Development Grants, and Arts & Sciences Council Committee on Faculty Research Grant. Merrill Shatzman and libi rose would also like to thank The Department of Art, Art History and Visual Studies, and Innovation Co-Lab at Duke University for the use of their laser cutters.

Bios:
libi rose will sometimes admit to being an artist. She will always admit to being fond of puzzles, alternative modes of learning/thinking, complexity theory and robots.

She collaborates with the SLIPPAGE: Performance, Culture, Technology lab at Duke University and is co-founder of the OFF microcinema in Fort Collins. Her work has appeared at various venues in the U.S., Canada and Europe—including Moogfest and MIRE. It is also freely available online because libi believes information should have no owners. She holds an MFA in experimental and documentary arts from Duke University and a BA/BFA in film studies from CU Boulder.

Merrill Shatzman, Professor of the Practice of Visual Art at Duke University has taught courses in printmaking, bookmaking, typography, drawing and digital imaging for the past thirty-three years. She received her BFA degree from the Rhode Island School of Design (1978) and her MA and MFA degrees from the University of Wisconsin-Madison (1981). Using relief and silkscreen printmaking methods, her images meld abstracted, readable letterforms and symbols extracted from Western, Middle Eastern, Far Eastern, Mesoamerican, ancient writing systems, contemporary graffiti, calligraphy, charts and maps. Her working process involves excising segments of her printed images, dissecting, layering, repositioning and reassembling them into symbols and icons that have become the trademark of her work. By continually modifying her imagery, she alters her prints, reconnecting and reinterpreting her complex forms into novel permutations that are visually, technically, and conceptually connected and related. 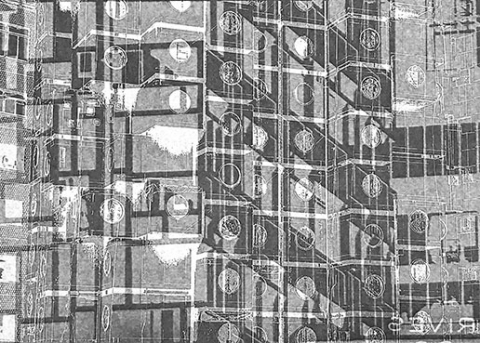