Question Bridge: Black Males opens a window onto the complex and often unspoken dialogue among Black men, creating an intimate and essentially genuine experience for viewers and subjects, while providing new opportunities for understanding and healing. This project brings the full spectrum of what it means to be “black” and “male” in America to the forefront. “Blackness” ceases to be a simple, monochromatic concept.

By creating an identity container (e.g. “Black” and “Male”), then creating a way of releasing the diversity of identities and thought within that container, we can break the container. Question Bridge strives to make it more difficult to say, “Black Males are___.”

This is a critical period in history for the African American community. In recent years, many have been able to transcend racial, cultural and economic boundaries while others have found themselves increasingly confined to the margins of society. African American men are particularly challenged by this paradox. A black man is the President
of the United States, yet black men are still severely over-represented in incarceration and high school dropout rates, and suffer disproportionately from various preventable health risks and as victims of homicide.

The representation and depiction of black males in popular culture has long been governed by prevailing stereotyped attitudes about race and sexuality. Far too little is known about the range of internal values and dynamics of this group. Scientists, social scientists, theorists, historians, politicians and activists have investigated the plight of the African American male on various levels and from diverse perspectives, yet not enough has been done to represent a mult-faceted and self-determined representation of this demographic. Ultimately Black males’ greatest challenges are with themselves.

The question is, “why?”
Question Bridge: Black Males opens a window onto the complex and often unspoken dialogue among African American men, creating an intimate and essentially genuine experience for viewers and subjects and providing new opportunities for understanding and healing. This project brings the full spectrum of what it means to be “black” and
“male” in America to the forefront. “Blackness” ceases to be a simple, monochromatic concept.

So what is Question Bridge: Black Males? The Question Bridge: Black Males project is a platform for Black men of all ages and backgrounds to ask and respond to questions about life in America. We created it to stimulate connections and understanding among Black men, but we also wanted to show the diversity of thought, character and identity in the Black male population so rarely seen in American media. In essence, we want to represent and redefine Black male identity in America. In 2012, the project launched as a documentary-styled video art installation, but since then, it has expanded to include an interactive website and mobile app, community engagement events and an education curriculum for high school students.

Why do you feel the need to redefine black male identity? Because we want to break down the negative perceptions people have about Black males. American media rarely shows whole, complex and authentic images of black men, so by creating a space where these images can live, we hope that people will start to see things differently.

So what exactly is a "Question Bridge?" It’s a method used by those who want to create honest expression and healing dialogue among members of a particular group. It works like this: first, one person asks a question looking into camera, as if they are talking directly to another person. Later, another person responds by talking directly into a camera. This question-answer exchange, the Question Bridge, reduces the stress of normal face-to-face conversations and makes people feel more comfortable with expressing their deeply held feelings on topics that divide, unite and puzzle. This was the central approach used in the project.

Question Bridge: Black Males is a fiscally sponsored project of the Bay AreaVideo Coalition (a 501c3 not-for-profit organization) and supported in part by a grant from the Open Society Institute: Campaign for Black Male Achievement, The California Endowment, The Ford Foundation, The Tribeca Film Institute, the LEF Foundation, The Center for Cultural Innovation, Nathan Cummings Foundation and the California College of the Arts. The project was supported by the Sundance Institute’s New Frontier Story Lab.

Additional support for this exhibit at the Power Plant Gallery was provided by the Hayti Heritage Center and Duke Arts. 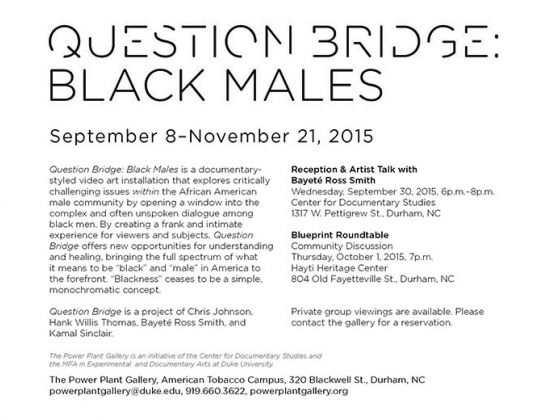 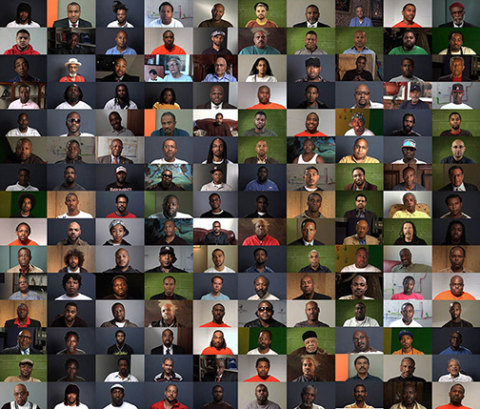