Dwane Powell: The Art of Politics

After forty years of drawing political cartoons at a pace of five per week, they probably total about 12,000. Each represented a day that started out reading or watching several news sources, followed by jotting down topics for an over-view before settling on one to draw about. Usually, the topic that made me maddest won.

Unfortunately, the little green man who slides inspiration under the door doesn’t come often enough, so the ideas may not flow until preceded by hours of doodling, head scratching, and pacing. A solid factual grip on an issue, combined with confidence in my take on it, is essential at this point in the process.

Eventually, a metaphor or image does come to mind and it is usually instant and fully formed. A quick sketch is then taped to a light table topped by a sheet of 2-ply Strathmore and the inking process is done with a combination of sable brushes and crow quill nibs. Maybe there really is a little green idea man. I just wish he’d come around earlier.

While photoshop or other digital media have become popular tools for coloring cartoons on the web and modern editorial pages pages, I’ve recently gravitated to the more satisfying approach of using water colors and pastel pencils.

Picking limited numbers of framed cartoons covering a broad time span presented a challenge. Eventually, some old and new favorites, along with some forgotten ones, were picked with a focus on whether it was prescient and held up over time, generated a degree of reader reaction, represented changes in my style over time, or just stood out artistically.

While on this trip back in cartoon time I found an amazing number of them that, with slight caption changes, would fit right in with todays news cycle. 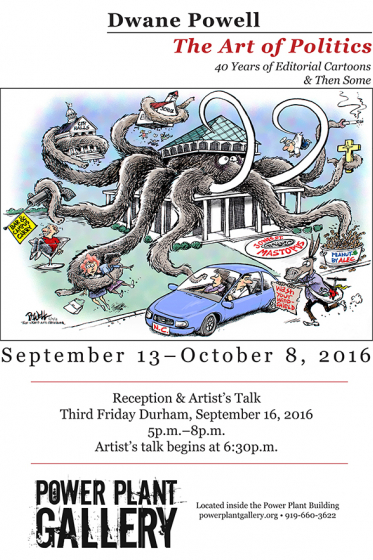 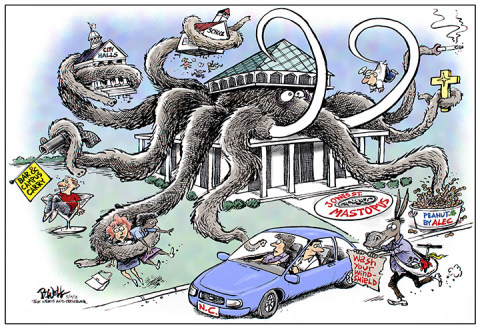