Cathy McLaurin: The North Wind and the Sun

The North Wind and the Sun works at deciphering the complexity of home - a distant place in ever-shifting territory. Focusing on my rural southern hometown of Siler City, North Carolina, I apply my position as a cultural worker in order to strike a balance between my own “on the ground” experiences of a southern repressed history, tradition, and trauma and larger political and economic forces. Having left home twenty-four years ago, I operate from a position of distance in order to interrogate a history and a place as complicated as home. The North Wind and the Sun, while operating as a form of self-portraiture with me telling myself through place - addressing what it means to have been constituted by a place with a relationship to the land and to labor - also tells a history of immigration driven by poultry industry labor practices.

Siler City, North Carolina is a community in significant transition both economically and demographically – much like the United States as a whole. Large-scale poultry industry’s mass recruitment of workers across the U.S./Mexico border beginning in the 1980s, transnational capitalism, and a small town’s desire to look to the past in order to brand nostalgia, reflect the impact of globalized economies upon and into the historical political and social situations in Siler City. In 2012, the Town rebranded with the slogan “Delightfully Unexpected”, fea- turing Aunt Bee of Andy Griffith Show television fame as a mascot. In a town that is more than 50% Latino and almost 20% African American, where police driver’s license checkpoints targeting Latinos are conducted with such frequency that an underground text messaging network has been established to alert Latino residents, the Town’s attempt to brand the “authentic” is one aspect of my larger research. My work attempts to peel back a veneer of complexity in order to reveal undercurrents of power, desire, and histories that combine with issues of race, immigration, and industrial decline.

The project draws on my experience working beside my grandfather in his chicken houses as a child in the early 1970s, a searing visual memory of passing through a Ku Klux Klan checkpoint while riding in the car with my mom when I was seven years old, and more recent observations of systematized racism and racial profiling in a Siler City that has seen the last of its poultry processing industry disappear in 2011 amidst complex global shifts that continue to ripple throughout the rural community. I draw sight lines between the KKK checkpoints of the past and the drivers license checkpoints of present day Siler City, conducted by local and county police that target Latino residents.

The North Wind and the Sun is the “umbrella” under which several works exist, including: No place like home, a video monologue, with me as narrator, which includes audio from interviews and recordings made during multi- ple visits to North Carolina in 2011-2013; an artist book, incorporating research materials including a selection of letters I wrote in 2012-13 to David Duke, former grand wizard of the Ku Klux Klan and to Oleg Bakhmatyuk, the Ukrainian billionaire who bought the last operating poultry processing plant in Siler City in late 2011 and abruptly closed it in 2012; and a geographically organized wall drawing that maps the complex relationships of people and events impacting into and onto Siler City.

In this complex narrative blame may easily be cast at specific individuals and corporations, as well as at the cul- tural conditions that permit such a situation. By problematizing the casting of blame, The North Wind and the Sun, questions truth, choice, and self-implication.

My work connects history and current social issues with notions of value(s), morals, national identity, philanthropy, kinship, and legacy. Through extended relationships with personal and institutional entities, along with research in archives and libraries, I challenge the systems that underpin complex social concerns. This manifests in ongoing projects that result in series of objects, installations, and performances. Exhibitions of the work are opportunities to push the narrative forward, allowing this history to exist within the conversation of art, thus providing space for contradictions. 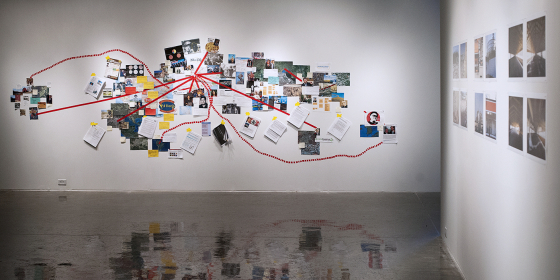 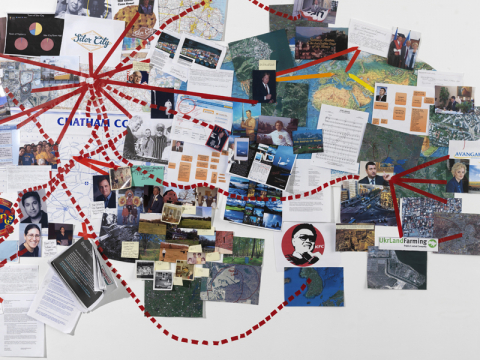